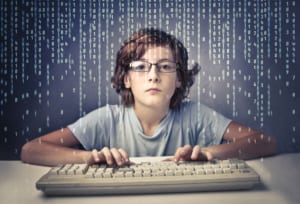 There are many commonly used programming languages, but C++ stands out from the rest in many ways. Similar to the C coding language, it was developed in the 1980s for general purposes. It brings modern techniques, like object-oriented programming, to the forefront of coding projects. Video games, apps, and websites are all dependent on C++.

Families don‘t always consider C++ for kids even though it is a common programming language. Children are learning how to code earlier and earlier, and teaching methods have simplified over time.

Unlike other languages, C++ uses math; however, once a student grasps the fundamentals, they can quickly advance and take the coding world by storm.

C++ is one of the most useful programming languages for kids to learn. It helps build problem-solving skills and develop good coding habits, plus it’s a great language for kids interested in video gaming and artificial intelligence (AI).

For older kids, C++ can be a gateway to advanced skills in other coding languages. These tween and teenage learners can apply the knowledge to graphic development, database development, and computation. All of these avenues can be the starting point for a future career in computer programming.

Which operating systems use C++?

Microsoft Windows OS is often associated with C++, but it is a widespread, universal language found on all types of computers and applications.

​​C++ is used to program a wide range of applications including:

C++ is a popular language across the tech industry. Developers use it for software engineering, communications, and gaming. It is also used in other industries, like healthcare and government defense. C++ has even influenced other programming languages, like C#, Java, JavaScript, and PHP.

Is C++ a good programming language for beginners?

An 8-year-old can definitely learn how to code starting with C++. Kids who learn the basics early are more likely to develop critical problem-solving skills. If they stick with it and master the fundamentals, it’s also more likely that they’ll take those skills into advanced challenges.

Teens and older kids can also learn C++ to enhance coding skills. In fact, as kids get into middle school and high school, they might find a new appreciation for video game development, web design, or Android app development, and use their newfound knowledge to explore new career paths.

Learning how to code in C++ can be broken down into a few simple steps. Users can refer to the C++ Standard Library and explore syntax to learn how to build statements and functions.

Challenging yourself is the best way to learn C++ and expand your knowledge of coding.

What are the benefits of learning C++?

Understanding computer programming can be a pivotal opportunity for many kids. C++ and other coding languages challenge kids to learn, use, and adapt to new technologies. Not only will C++ be a coding skill they can leverage throughout their lives, but it might even guide them down a career path they never imagined. Having coding skills opens the door to countless opportunities.

Children and teens who learn how to code often:

Where does C++ stand compared to other programming languages?

While some code languages are written for a specific purpose, C++ is a great general-purpose language. It works well for most programming tasks.

Many jobs in computer science and software development look for candidates with C++ programming language experience. Since C++ has been around since the 1980s, there are a lot of jobs to maintain, update, and modernize existing code to keep up with new programming efficiencies.

C++ is also the language that is frequently used for video game development and graphic design. Learning C++ will make it easier to learn other programming languages. Coding languages like CSS, Python, HTML, and JavaScript all benefit from real-world experience with C++.

Give your kid a jumpstart on a STEM career path with coding camps and classes that provide foundational knowledge in C++ coding.

TheCoderSchool provides coding classes, private coaching, and camps that help kids explore computer science and programming. With flexible courses and locations across the United States, we challenge the curiosities of the next generation and help them take their interest in technology to the next level.

Find a class near you and reach out to the educators at theCoderSchool today with any questions. Or if you’re interested in the broader topic of the best coding languages for video game development, try this.


What is theCoderSchool? We are an after-school drop-off (and virtual) program for kids learning to code - a coding school! There's after-school kung fu. There's after-school music lessons, sports, art, tutoring, Chinese, you name it, it's out there. But coding for kids? We're among the first of many, and the largest in Silicon Valley with more locations on the way around the country. The future will be ever more dependent on technology so let's get our young generation ready. Learn to Code, Change the World®.

For questions about partnerships, curriculum, schedule, camps, or other operational inquires, please contact your nearest school.
For national franchise questions only, email us at info@thecoderschool.com. Please include the city/state you're writing from.